Today is an amazing day in our extended family. My Uncle Tony celebrates his 93rd birthday. I would wager that he has spent most of this clear, crisp November day on the phone — with all his well wishers.

Of course, I was one of them… His voice is strong, and his mood as always, congenial. He says he and his wife Albina have tried not to make a big deal about their birthdays since they crossed the 90 milestone, but I know him well enough to feel the energy he exudes today. After all, why not feel great! He has lived 93 years beyond his birth in 1922. I use that phrasing because he weighed a mere 1.5 pounds when he was born. His chances of survival were less than one percent at the time. 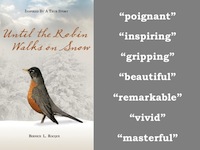 As many of you know, UNTIL the ROBIN WALKS on SNOW, is the story of his birth. Whether it was the determination and problem solving skills of my grandparents, their family, the midwife, and friends, or the faith of all praying for a miracle — OR perhaps the strength of both forces working in unison, he survived agains the odds to live a long and productive life.

As a small celebration of this day, I decided to write this post about a beloved tradition that “baby Antoni” started in his clan — which now includes 4 generations. Isn’t it astounding that he has lived to see and enjoy the company of his great grandchildren!

Recently, I asked Uncle Tony when he began making One-Eyed Eggs. He started to laugh and told me the story. When my father and he were kids on the farm in Norwichtown, their family walked on Sunday mornings to Sacred Heart Church for Mass. Afterwards, they would rush over to the small store across the street and buy a Sunday Bulletin. Like most newspapers of the time, the Norwich Bulletin’s Sunday edition contained an insert of comic strips which they loved reading. 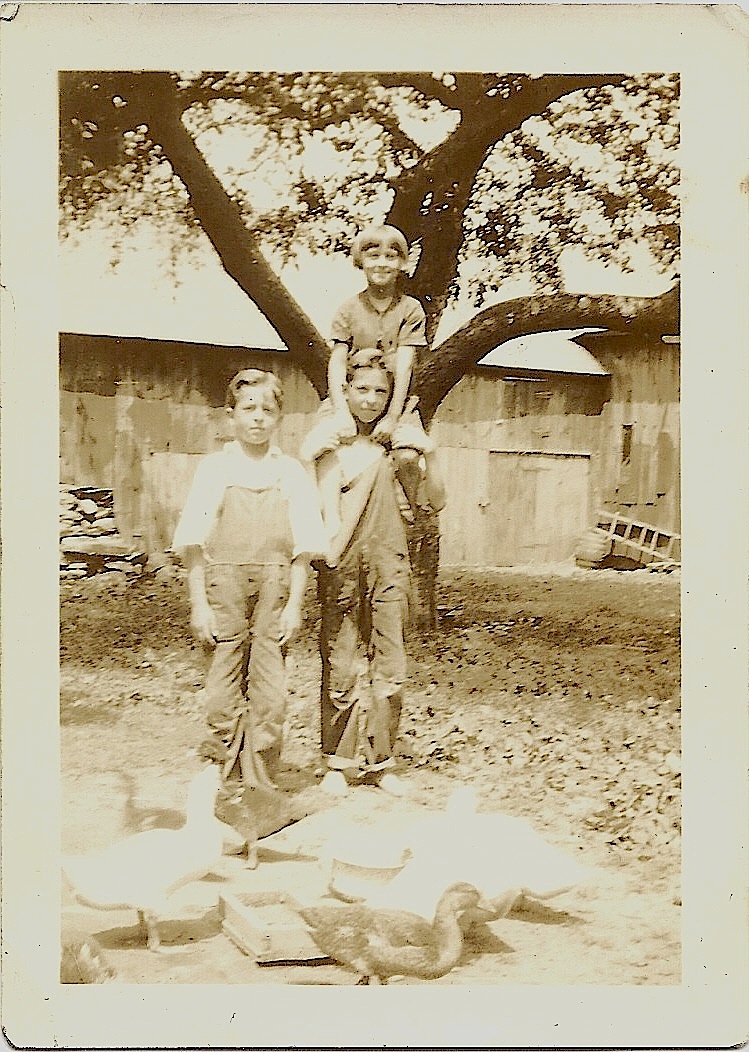 My Uncle recalls being about ten years old, or so, at the time. My father would have been 12. Here they are in a vintage photo with their sister, Vee, taken about the time of this story.

Winnie Winkle, the first comic strip about a working woman was a favorite of theirs. The many characters in this comic strip included a younger adopted brother and his friends from a rough-and-tumble neighborhood. One of these friends was Denny Dimwit.

In this particular Sunday’s comic strip, Denny Dimwit was making One-Eyed Eggs. My father and uncle had never heard of them, but they decided to try their hand with whatever information the comic strip that week provided.

How-to experimenters from early in their lives, my father and uncle made  these One-Eyed Eggs that Sunday. There was no shortage of eggs on the farm, so even though this was during the Great Depression, their mother, Marianna would not have objected. After all, growing boys needed a good breakfast and she liked seeing them teach themselves how to do things. I can easily picture her nodding and going about her chores, in the understanding that moments like this reflected the intense effect her perpetually curious father, Nikodimas, had had on his two grandsons when they were younger. 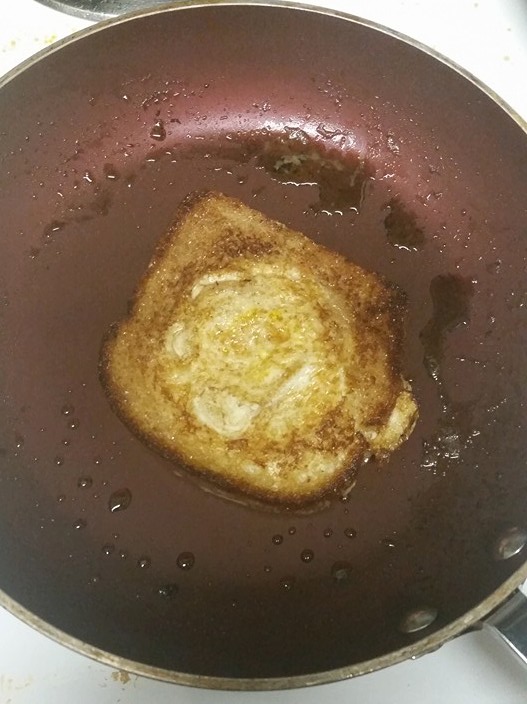 The subject of One-Eyed Eggs came up a few months ago when one of my uncle’s grandchildren posted this photo on social media. Her two young daughters often request “egg toast.” Amy is happy to oblige as she treasures the many happy memories of her grandfather making these One-Eyed Eggs for her when she visited her grandparents as a child. She said the eggs tasted wonderful with the Raspberry Danish her grandmother served with them.

Amy’s brother, Andy, also makes the eggs frequently, and is thought by some to be the finest “One-Eyed Egg” chef in the family. Amy’s One-Eyed Egg looks pretty delicious, too, don’t you think?

I don’t recall my father making these eggs when I was growing up, but curiosity began to propel me to try to make some now, not so unlike that scene of my dad and uncle giving it a whorl more than 80 years ago, except that I was cooking on an electric stove and they were using a wood stove. 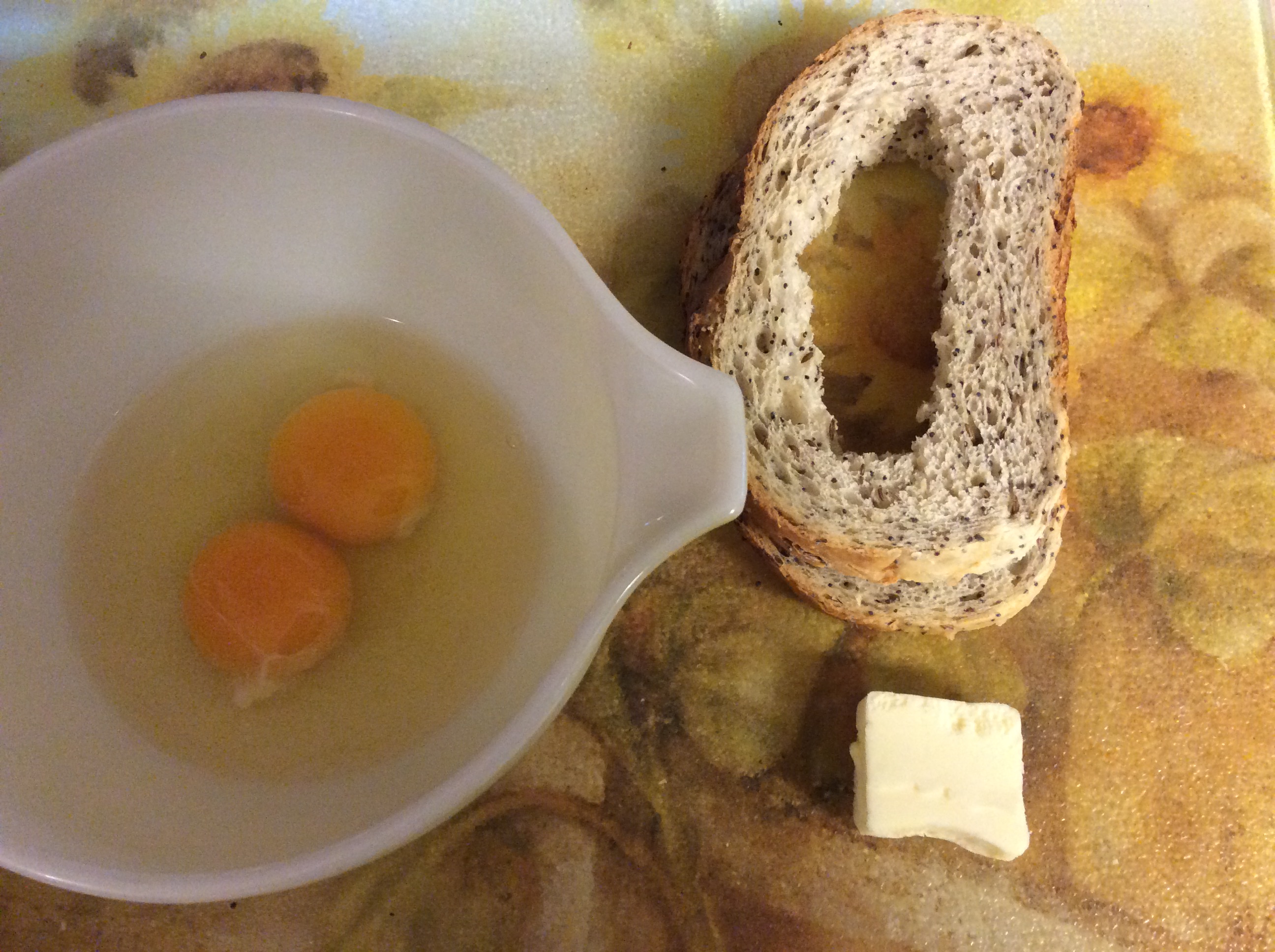 So one day, after these chats online, I took out some eggs, some butter, some bread we had bought from the bakery, and a fry pan. With a sharp knife, I cut a hole in two slices.

Uncle Tony’s son, PJ, starts with frozen bread. Easier to cut, he says, and it doesn’t burn as easily in case your stove burner temperature is too high. He likes to let them sit in the butter a bit before he adds the eggs. 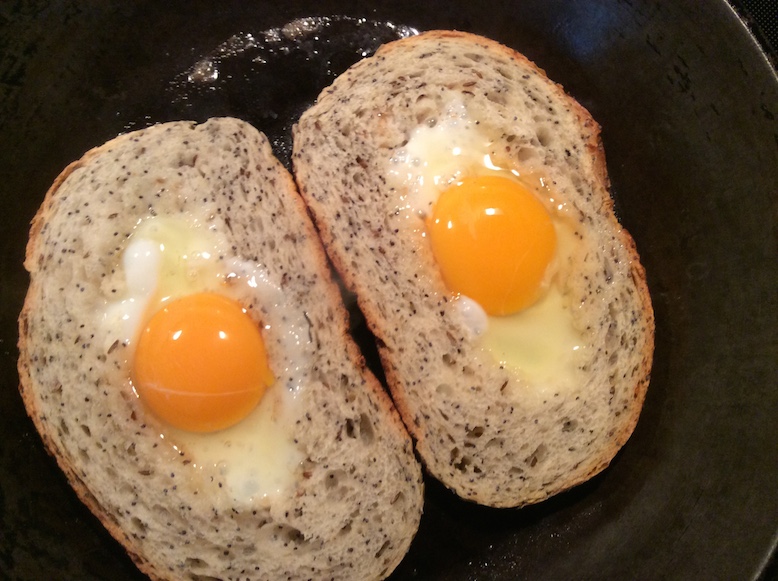 After melting the butter on medium heat, I placed the two slices of bread side by side in my heated fry pan. Carefully, I added each egg to the center of each slice.

The egg white changes from clear to whiter pretty quickly. You definitely need to keep a close watch on it. Some people like One-Eyed Eggs sunny side up, but our family prefers over light.

When you turn it over is a matter of experience, judgement, and your preferred egg doneness. I prefer over light with no egg white goo. So, I waited until most of the white was cooked, then flipped each One-Eyed Egg. 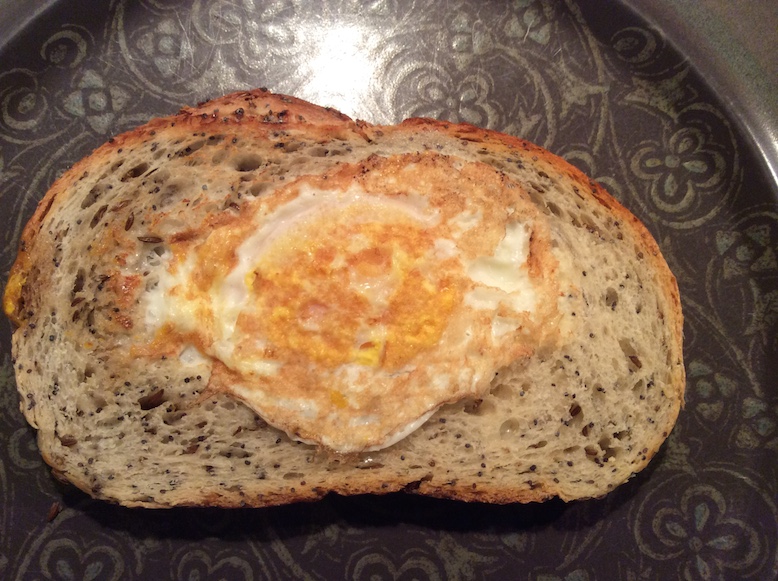 Just as if you were cooking a regular over light egg, when to remove it from the pan is a bit tricky for most people. Cook it just long enough to sear everything moist and remove it egg side up to a plate. Like hamburgers, they are best flipped only once! 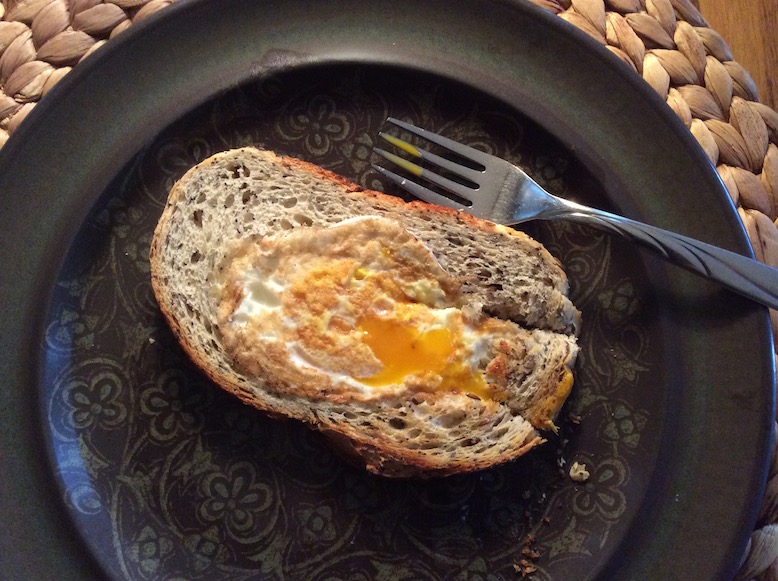 On my first try I broke one of these beautiful eggs! But, here is the one that smiled back at me.

After I made these, I tried them again one day, and both came out just great.

As I write this, I feel so grateful that my uncle got the chance to share the how-to of this adventure from his younger years with his clan and our extended family.

Happy Birthday, Uncle Tony! And many more we hope.