Just when this wintry spring of nor’easters seemed endless, an unexpected email appeared in my Inbox.

Laura Vasselle, a librarian at Three Rivers Community College (TRCC) Library in Norwich, CT (the setting of my books) was inviting me to an upcoming event at the community college. 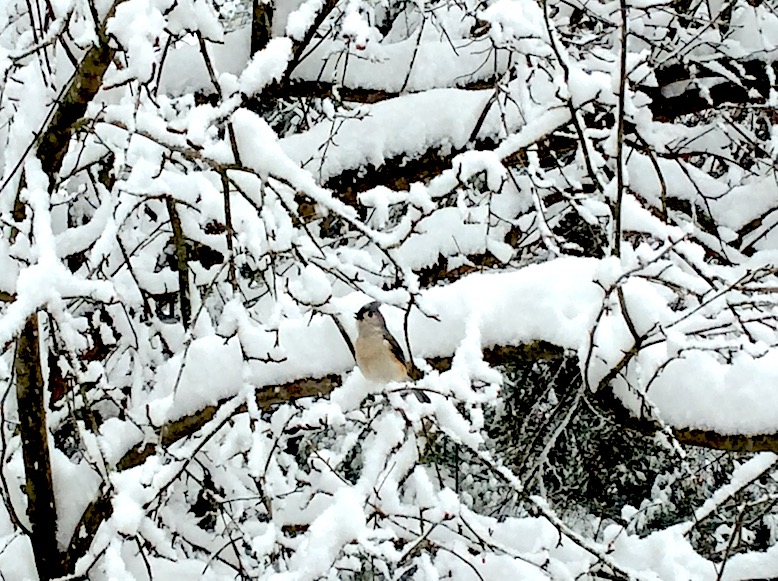 While getting acquainted over the telephone, Laura told me the story behind the planned rededication of a mural in the TRCC Library. She had me in stitches and I recall saying, “Laura, this reminds me of an archeology find!”

Like many good adventures, it started with a question. Kelly Sanders, a TRCC student, pointed upward to the rather large photographic mural. “What is that building?”

“I don’t know,” replied Laura, as she and Kelly continued to gaze at the photo.

The expansive image sat alone on a wall in the stratosphere gallery of the Library’s staircase. Despite being neither a Norwich native nor resident, Laura felt drawn to this building, as if it were a charismatic person. Perhaps the mural’s 12’ x 6’ size and 18-panel design were magnifying its presence. For some unknown reason, the mural was missing an identifying plaque.

Sometimes idle curiosity dooms the furthering of a question like this. Neither person cares enough to pursue it. Other times it continues to pulse in the psyche. Like a piece of haunting music, the vintage-looking mural had captured the duo’s attention.

The two, TRCC Library staff member and student assistant, found themselves casually posing the same question to more and more people during the course of everyday library business. “Do you recognize this building?” turned out to be a more difficult question than they expected.

A sliver of light finally pried open the perplexing mystery! Some online research and additional questions placed “the old mill” in the Taftville section of Norwich. The research stream led to Taftville Fire Chief Tim Jencks, a tour of Taftville and the Ponemah Mill neighborhood by Fire Chief Jencks, then a special viewing of the Norwich Historical Society’s new documentary of the Mill.

As someone who worked for two decades in a large global business and even longer as a family historian, I know organizational memory and family history memory share a similar pattern of loss. Time passes and people carrying knowledge exit the scene. What might have been general knowledge can narrow into the memories of a few people—that is, if you’re lucky.

Fortunately, “digging” can rediscover people and artifacts—illuminating once again their essence. The Ponemah Mill operated for about a century, from 1871-1976. In recent years, descendants of Ponemah’s employees have walked inside the Mill’s walls, thanks to the WALKTOBER tours sponsored by the Last Green Valley. In this 2014 tour photo, Taftville Fire Chief Jencks tells us about the famous Ponemah Bell, sitting just above this fifth floor landing. (For more information about the Last Green Valley, see the link at the end of this article.) 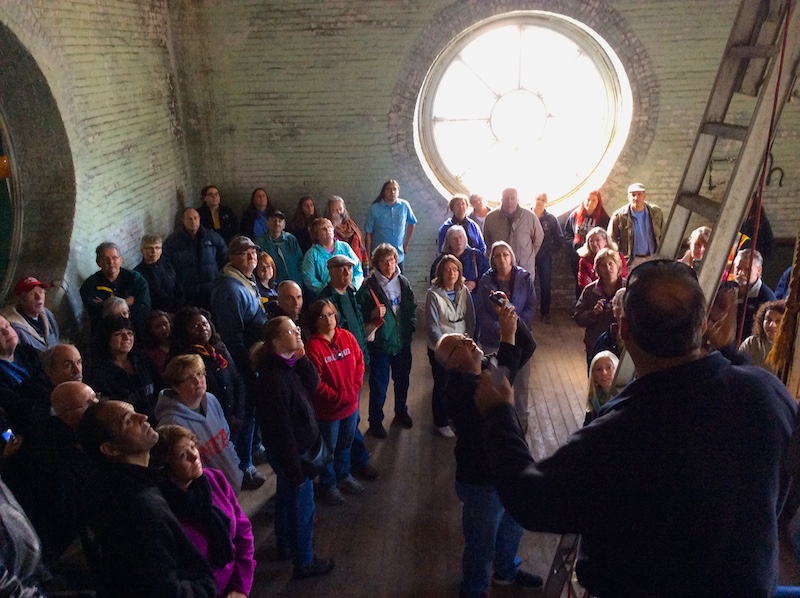 During an April 5, 2018 radio interview in advance of the mural’s rededication event, Laura remarked to iCRV host Gwen Pond that the building “wouldn’t allow itself to be put down.” Maybe its essence was beckoning for remembrance, so that its storied past would remain in the light—once the transition to its next life was complete. CLICK HERE to listen to the recording of the April 5th radio interview.

I think we have lots to learn still about things natural and mystical. Two examples that have fascinated me in recent years come to mind. We now understand how trees communicate with nearby trees, and thanks to epigenetics research we now know that extreme events early in our life can change our DNA and spill over into future generations. (Links at the end of this article.)

Research, by the ad-hoc team of TRCC folks drawn into the adventure, had also revealed the name of the artist/photographer who designed and installed the Ponemah Mill mural. My recently released book, The Ponemah Years: Walking in the Footsteps of My Mother turned up in a Google search. 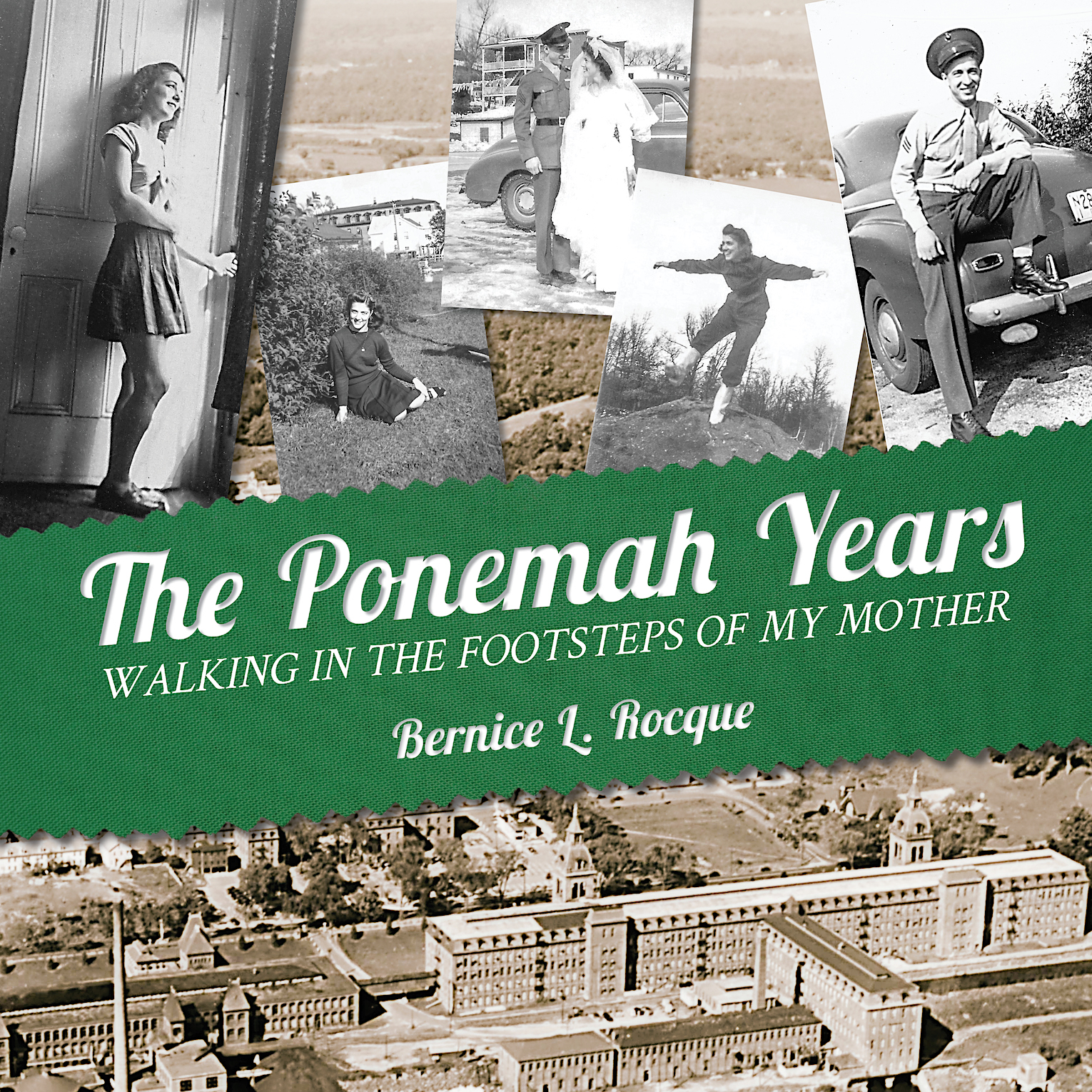 I wrote this book while a construction firm was converting the Mill’s Main Building into apartments. My mother, a weaver, had worked on the 4th floor during the period 1937-1950.

At the heart of the book was my journey to know my mother better.

As a genealogist who writes to preserve the essence of my loved ones and forebears, i.e., who they were as people, I know this majestic building has embraced me in recent years, too.

How I looked forward to everything about the event on April 11, 2018! 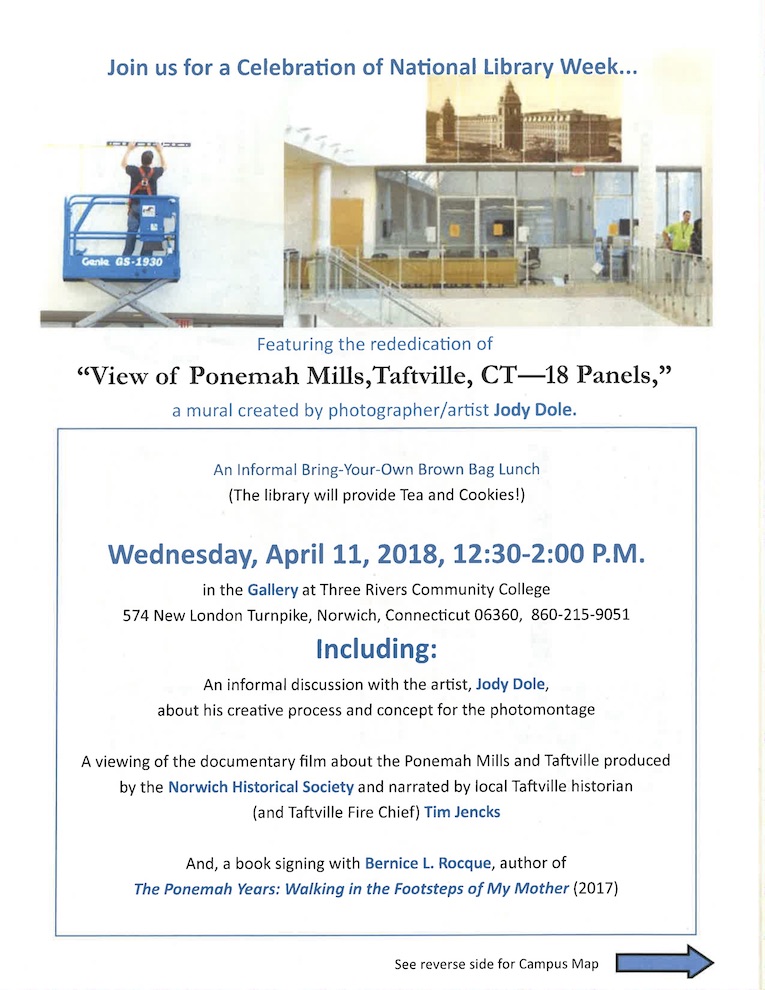 The program, with its informal personality, consisted of three parts:
(1) the photographer Jody Dole would discuss his methods and how he arrived at this mural design;
(2) we would view the Norwich Historical Society’s new documentary about the history of the Ponemah Mill, and;
(3) I would talk with attendees and sign books during cookies and tea.

Before the program began on April 11, 2018, we were fortunate to snap this photo of Karen Aubin, moi, Jody Dole, and Laura Vasselle in front of the first slide of his talk.

Karen is the granddaughter of my mother’s boss at the Ponemah Mill. I met her last fall, when I interviewed her, her dad, and her mom as part of my concluding research for the book.

Prior to the invitation to be part of this event, I was unfamiliar with the work of Jody Dole. Not for long! Once a librarian…. Of course, I googled his name and learned Jody is a prominent artist/photographer, known especially for his work in advertising and his techniques of giving contemporary photos a vintage look.

During his talk, Jody Dole relayed how he came to develop this mural of the Ponemah Mill’s Main Building.

After he moved to Connecticut, one of his NYC business contacts invited Jody to join him at a construction site in eastern Connecticut. Once in the open multi-level staircase area of the future TRCC Library, Jody asked, “What are you going to do with all this wall space?” His contact laughed out loud, “That’s why I brought you here!” 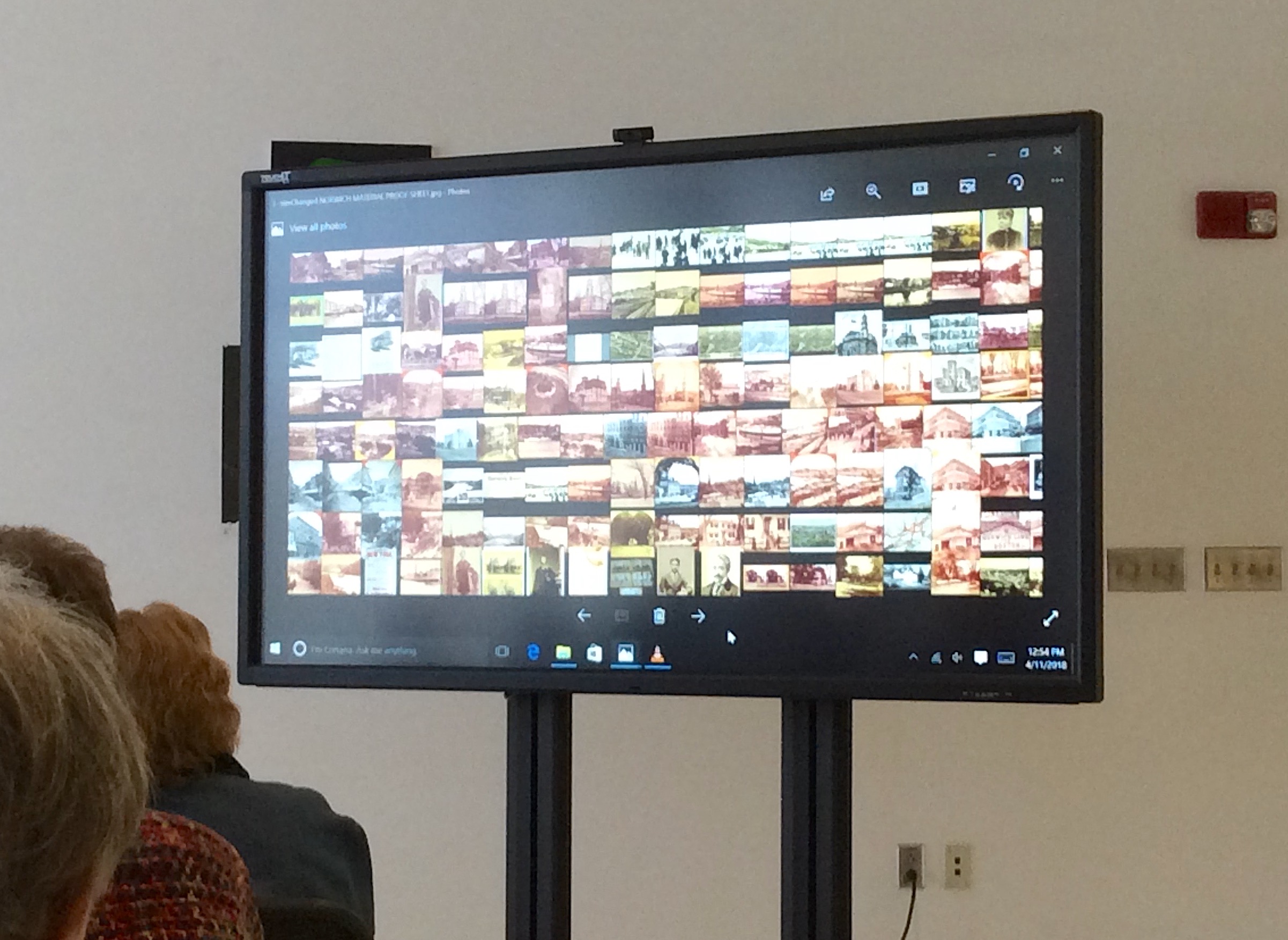 Invited to offer a proposal, Jody first envisioned a high-tech display that would rotate images of people and locations from the history of Norwich.

He also prepared a backup design: a multi-paneled mural of the Ponemah Mill.

Jody told us much time passed after he submitted his concepts. He assumed another artist had won the commission.

But months later, Jody learned they wanted him to refine his alternate proposal: the mural of the Ponemah Mill. The image was selected from the extensive photo collection of his friend, Matt Isenburg. (For more information on Jody Dole or Matt Isenburg, see the links at the end of this article.) 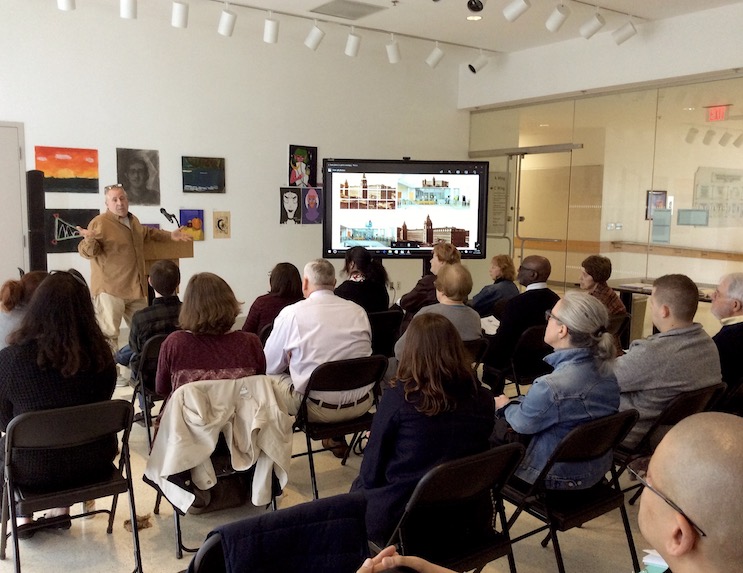 Jody explained how he tried different panel partitions, and once decided, how he envisioned the resulting artwork and the installation in its new space, as enlarged below. 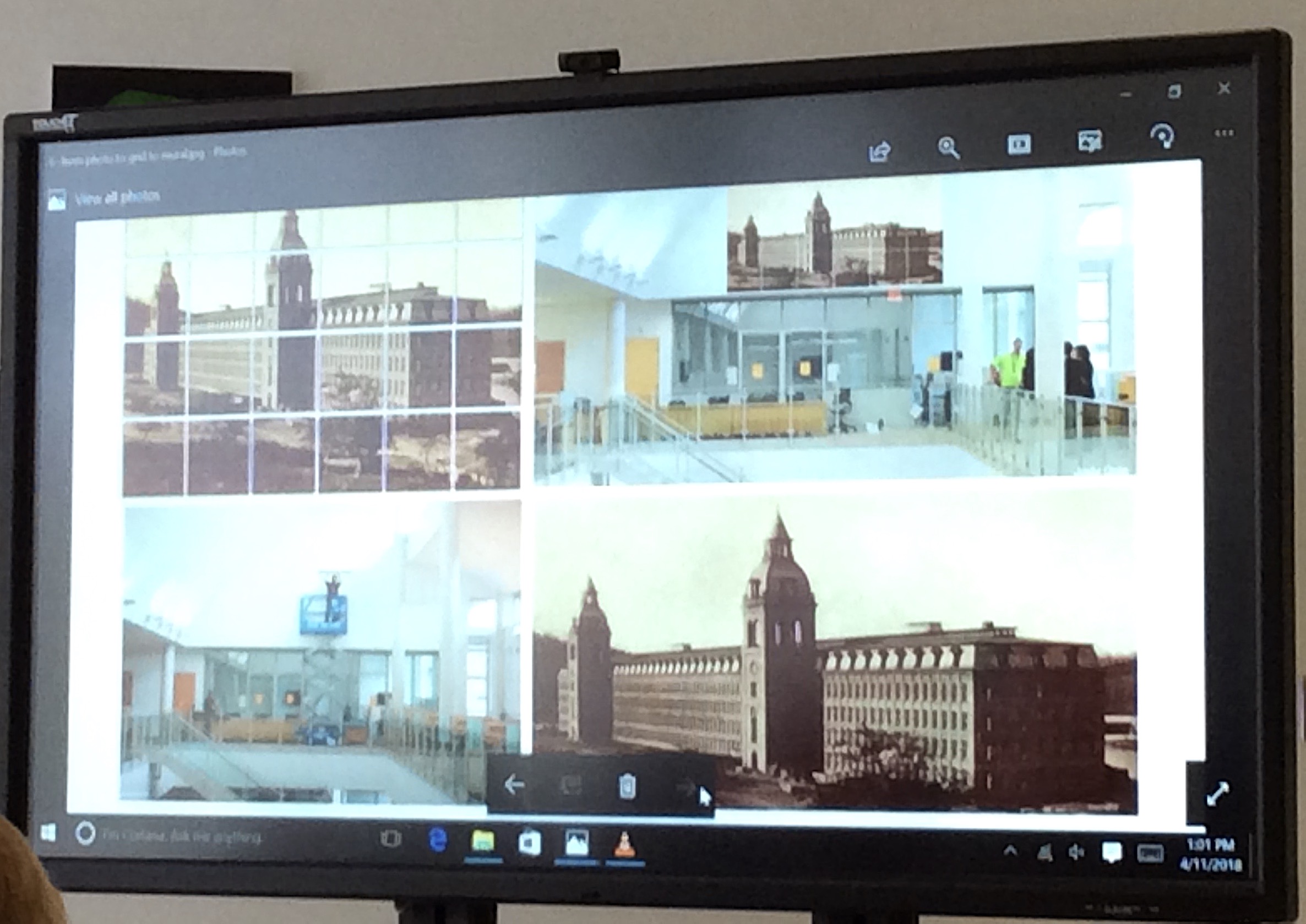 Jody noted the 3 levels of preservation taken: the mural was printed on archival paper, with permanent ink, and framed with UV protected glass. I cannot help but wonder if all that special care strengthened the allure of this amazing image.

Attendees then viewed the new documentary film produced by the Norwich Historical Society. A Brief History of the Ponemah Mill, narrated by Taftville Fire Chief Tim Jencks, provides a great capsule of the Mill’s history. I remember with fondness being inside this Mill where my mother had worked. I took the photo below during a 2014 WALKTOBER tour of the Ponemah Mill, in an area that had been partially restored. 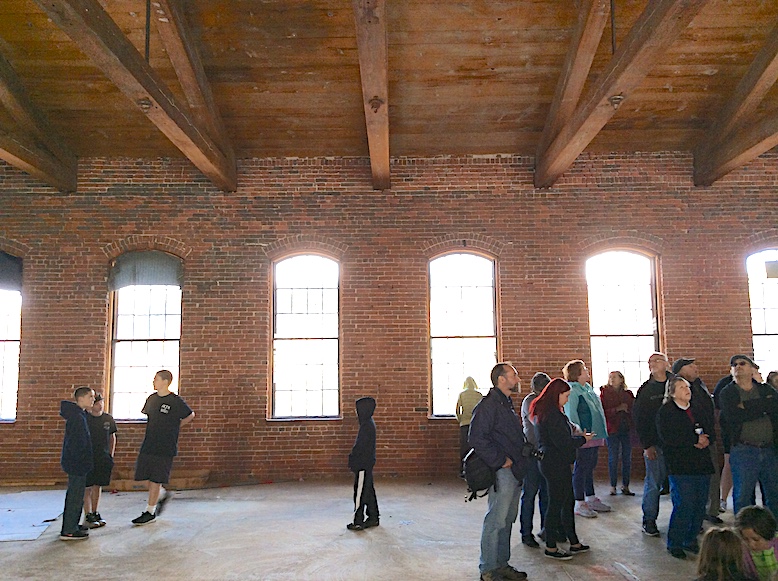 I was familiar with much of the film’s content from my own research, but I particularly liked three reminders:
(1) just how critical a technological breakthrough Eli Whitney’s cotton gin was to the subsequent mill era;
(2) how the tall, large windows were designed to illuminate the mill’s work areas in a time when electricity wasn’t as reliable; and
(3) that I am always mesmerized when old timers relay their remembrances. (I could have watched another ten interviews of people who had worked at the Ponemah Mill!) 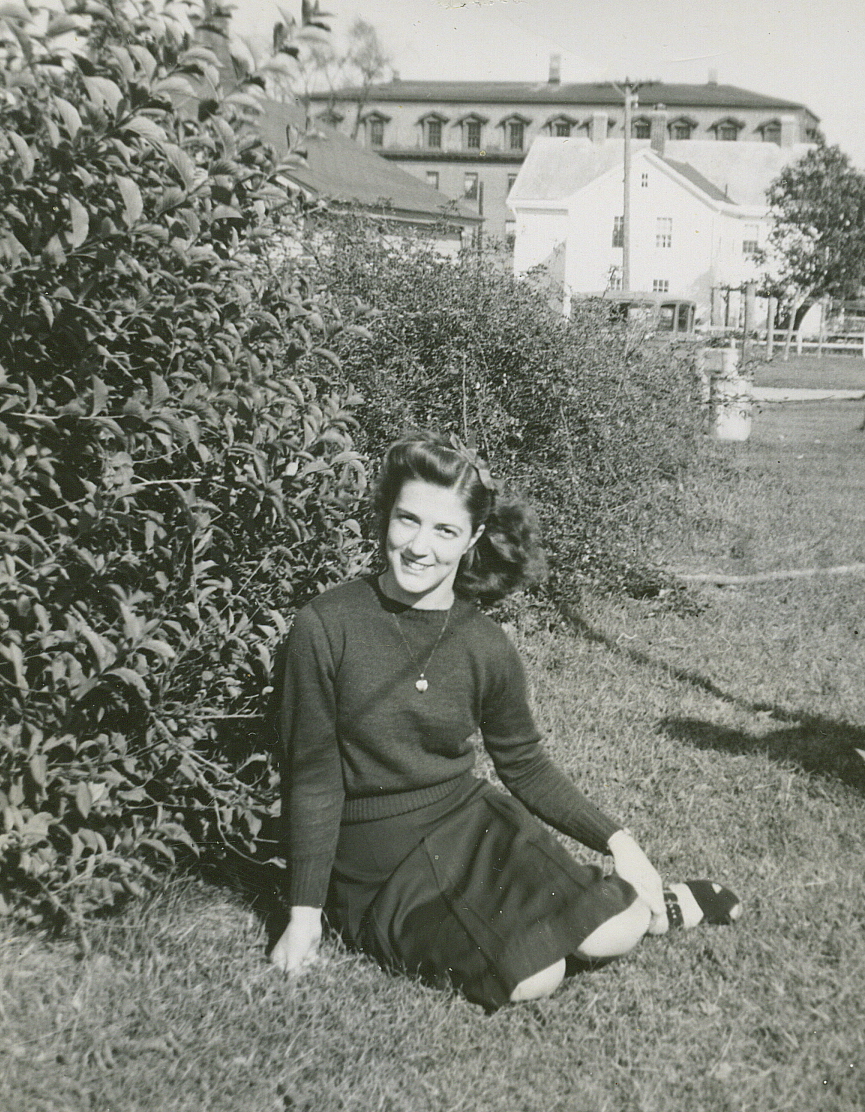 Laura asked if I would share a few words about my mother and the book I wrote about her.

Gabrielle Picard was 4 years old when she arrived in Taftville in 1924 with her parents and eleven siblings.

Mom’s young life was difficult. Her 1940s job as a weaver contributed in a positive way to her busy life. For its time, Ponemah seemed a good employer.

I shared some of the weaving remembrances of my mother and her sister, Rollie, from The Ponemah Years... 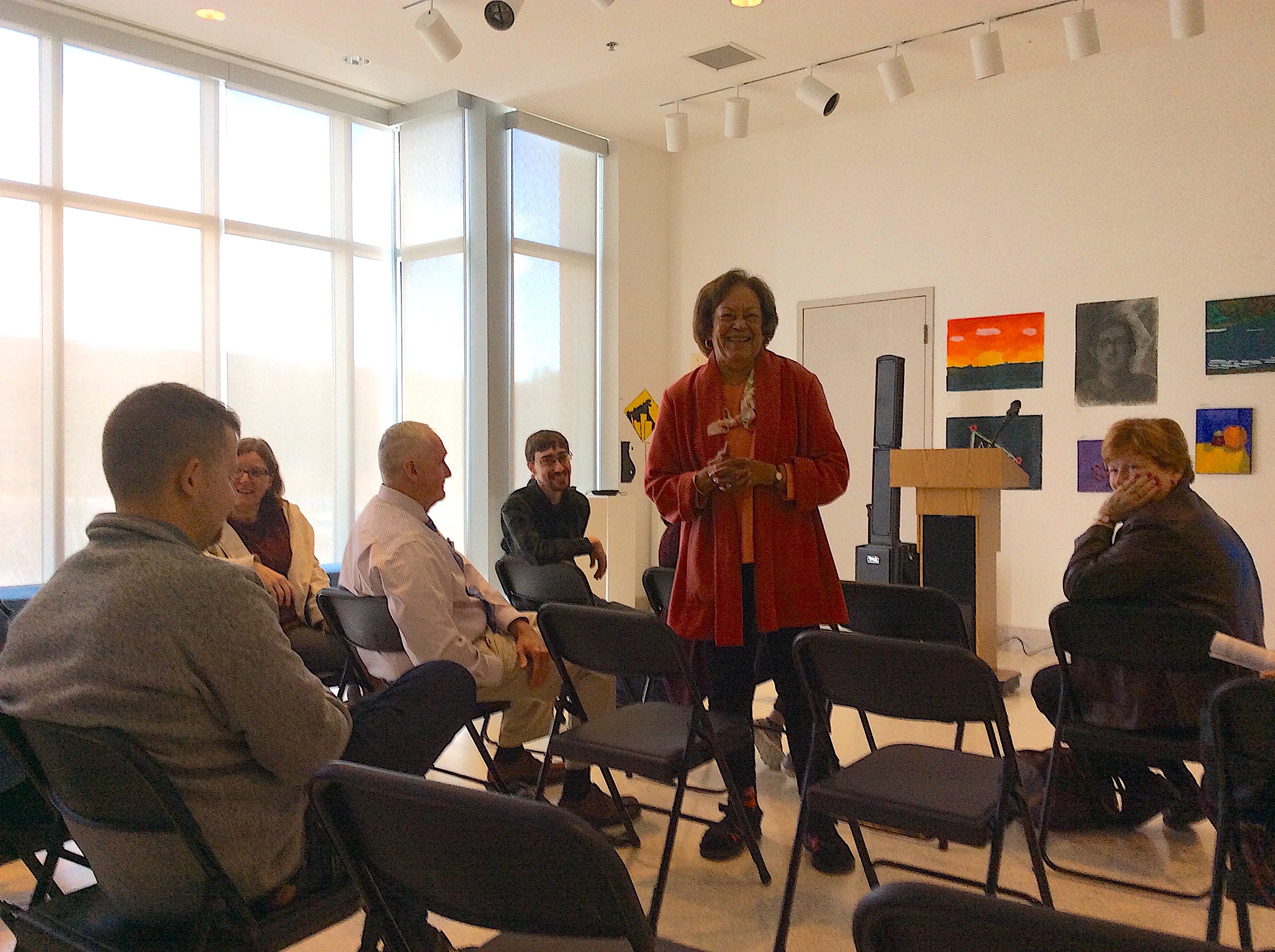 Later, when I viewed my photos, I realized Ian McNatt was sitting just to the left of Dr. Jones when she spoke with us. A student assistant in the Library, he transported my appearance boxes on arrival and departure, using a handy library cart. I so appreciated his help. It triggered fond memories from the first third of my career, when I worked in libraries.

It was time for the third part of the program: refreshments in a space where attendees could easily mingle in small groups and exchange their take-aways from this wonderful event.

Sunshine streamed into our comfortable meeting space where tea and cookies hit the spot and conversation buzzed. I don’t often experience such a sun-filled location for book signing. It made for a glorious atmosphere for everyone. 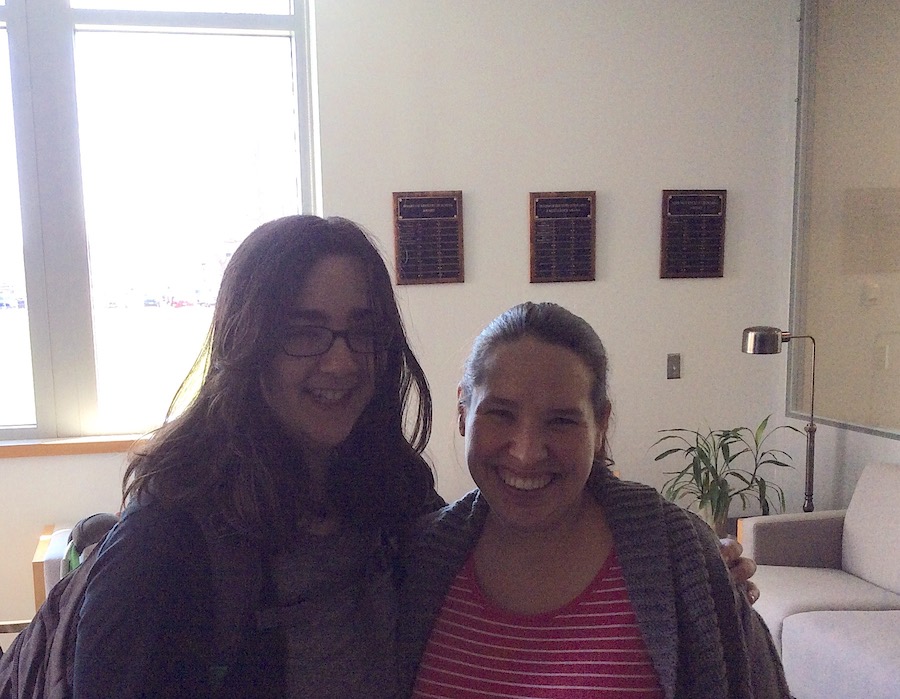 I so enjoyed my chats with Dr. Jones and with Mildred Hodge (the Director of Library Services), with Jody Dole and his family members, with staff and students, such as Sophia Faulise and Kelly Sanders (photo left), and many other folks interested in the Ponemah Mill mural.

A student assistant at the Library, it was Kelly who started the initial research on the building in the mural.

There was a melancholy point when those of us who still remained hated to leave the gathering. Laura, Gwen Pond, and I lingered a short while. Laura reminded me about the photo I had wanted to get in front of the magnificent mural of the Ponemah Mill, the mural we had honored that day. (L-R: Gwen, Bernice, Laura.) 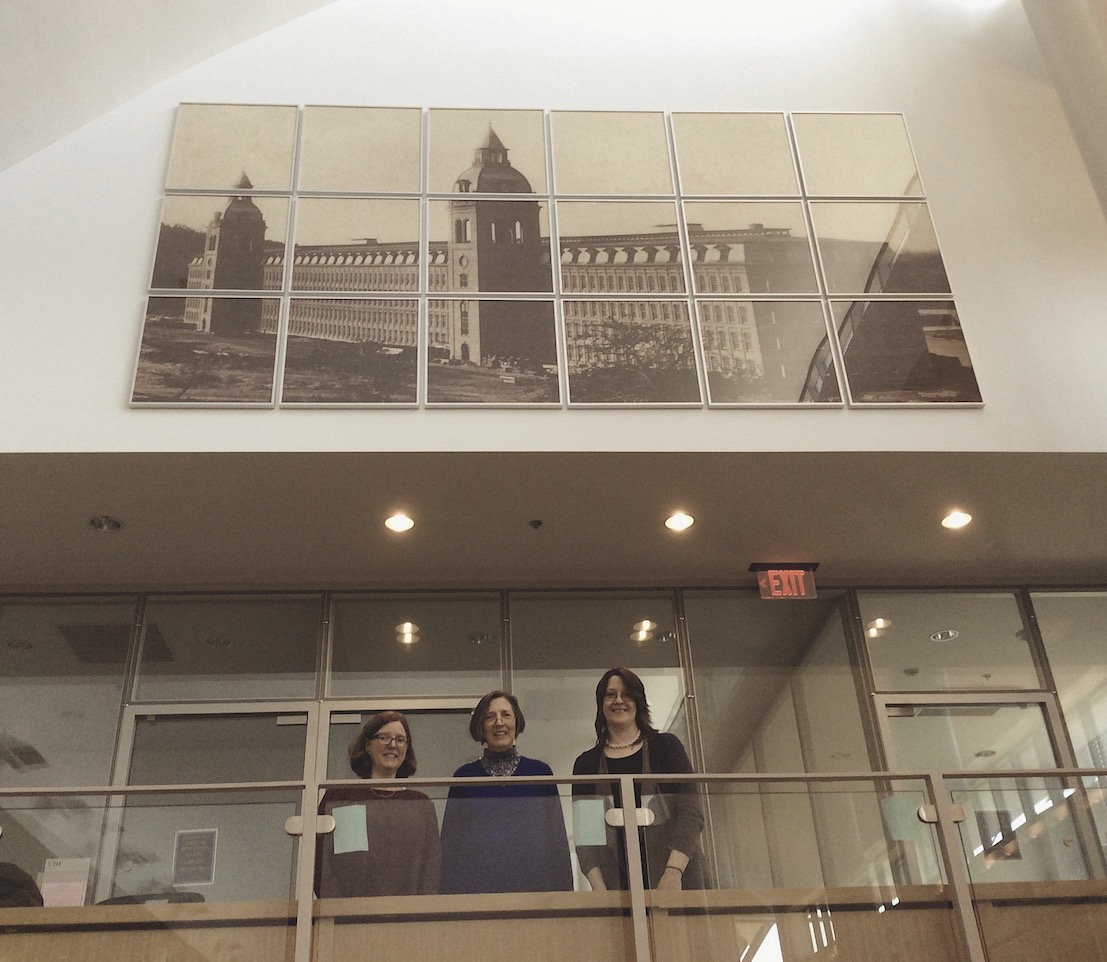 “Ponder” seems to be the right word for the dangling question. Do buildings possess an essence, just like people and other living things? Or, could a melded essence exist of all who have toiled and dreamed within their walls? What do you think?

I can imagine my mother was smiling that day. The building, where her weaving had so fulfilled her as a young woman, was appreciated once again. With a sparkle in her eyes, Mom would say that TRCC staff and students were “paying attention.” Given the high value my mother and her own mother placed on education, it would please them that TRCC had encouraged a learning bud to bloom—the one embedded in the initial question, “What is that building?”

In the process of this event’s coming and going, the songs of serendipity and spring arrived together for me (and perhaps others connected to this outstanding event). What a powerful duet, their joyful voices filling the air—with light and color and energy. 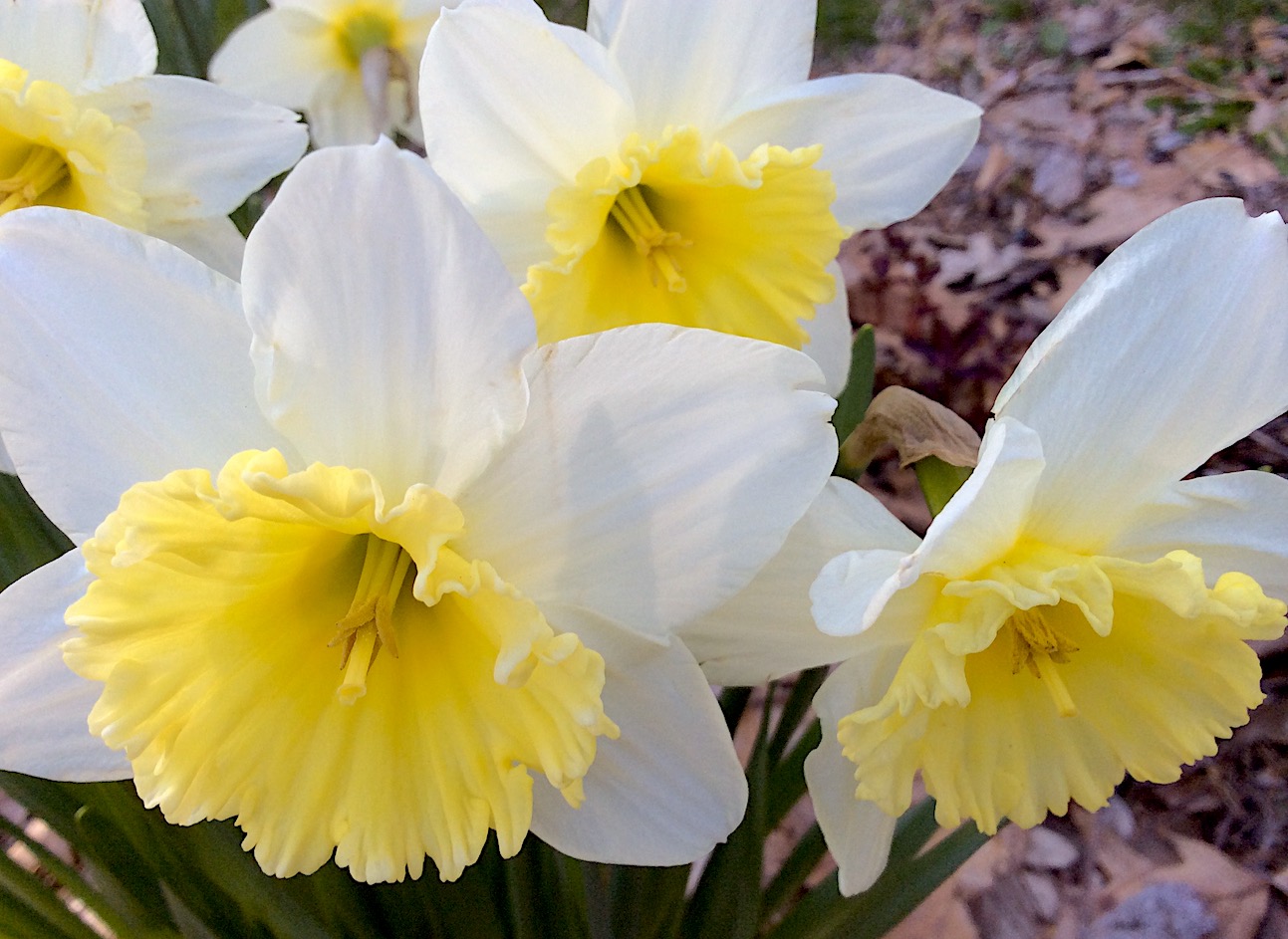